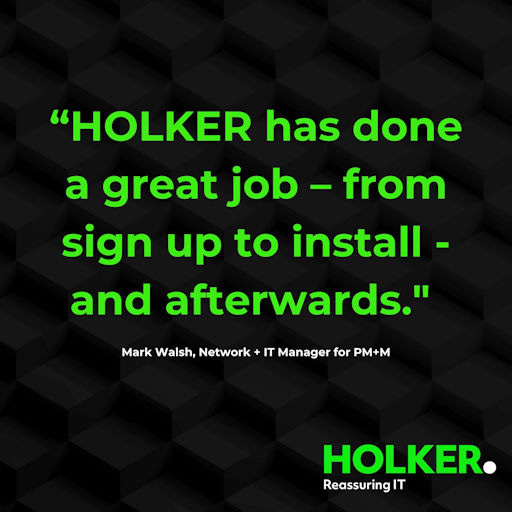 “HOLKER has done a great job – from sign up to install – and afterwards. From day one, they have followed the agreement to the letter – and managed to turn around the installation of the new phone system in two weeks,” says Mark Walsh, Network + I.T Manager for PM+M
PM+M, an independent leading firm of accountants, financial planners and business advisers based in Lancashire, started working with HOLKER during the acquisition of another business.

Mark explains: “Our existing phone system wasn’t sustainable – and conversations went on from there.
“We did look at other phone systems and all companies were invited to present and give a demo. We are an accountancy business, so we really look at the numbers.

“HOLKER already looked after the phone system for the acquisition and their price was reasonable, so we decided to go with HOLKER.”

PM+M have moved from their PBX – a private telephone network used within the company – to an 8×8 Cloud phone service, and the number of users has increased from 120 to 150.

Mark said he has been impressed with the new system so far.
“The phone system has all been installed and any teething issues have been resolved – but we know the helpdesk are there for support if we need them. It is running just as they said it would.
“I’ve been impressed with the customer service. Staff at HOLKER have been friendly, they’re easy to talk to, they’re approachable and most importantly they understood what we wanted.
“They turned it around on a tight budget and time scale – and they haven’t let us down. Our experience so far has been great.
“It has been top notch and I would recommend them. It has been a good experience so far and hopefully it’s the start of a good relationship with HOLKER.”

PrevPreviousWhat’s a cyberattack got to do with a turkey factory?

Please note, we have changed our number to: